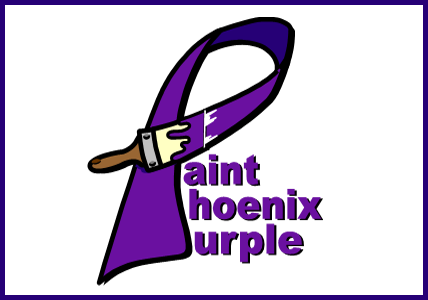 The city of Phoenix’s domestic violence awareness campaign, “Paint Phoenix Purple,” has made significant strides since beginning in 2013 by educating and providing resources to thousands of people.

The campaign was started by the city of Phoenix in part due to the impact domestic violence calls have on city employees such as police officers, firefighters and staff from the Phoenix Family Advocacy Center.  The main goal of “Paint Phoenix Purple” continues to be that by educating people, domestic violence can be reduced and eventually eliminated in the community.

In 2013 the city created a Roadmap to Excellence plan to make Phoenix a national leader in ending domestic violence and serving its victims. Thus far, hundreds of victims have been helped, hundreds of others have been made aware of signs of abuse and resources available, other cities in Arizona have joined the campaign in addition to Maricopa County and the state of Arizona.  Some of Phoenix’s accomplishments are:

Beginning Oct. 1 and throughout the month, the city of Phoenix will “Paint Phoenix Purple” in observance of National Domestic Violence Awareness Month.  Displaying purple throughout the community sends a strong message that there is no place for domestic violence in the workplace, homes, neighborhoods or schools.

Departments and employees will help raise awareness about the need to end domestic violence.  Some examples include:

“These creative and colorful displays are a reminder to the community that one in four women and one in seven men has been a victim of domestic violence. It impacts all of us,” said Mayor Greg Stanton. “Painting Phoenix Purple also demonstrates our commitment to becoming a national leader in preventing and ending domestic violence.”

Residents also can show their support for the third annual campaign with displays of purple.  Homeowners can install a purple light bulb on their porch; join employees and wear purple throughout the month, especially on Oct. 15, which has been designated as the statewide day to raise awareness; use the hashtag #AZWearPurpleDay on social media; and tie a purple ribbon on car antennas, etc.  Together, the community can raise awareness about domestic violence and its impact on families.

“The city will continue to be a national leader in domestic violence prevention, and we’re counting on dedication from the entire community to make a difference,” said Councilwoman Laura Pastor, chairwoman of the Parks, Arts, Transparency and Education Subcommittee, which oversees the city’s efforts to combat domestic violence. “I encourage everyone in the city to Paint Phoenix Purple in October to show our commitment.”

For more information about the Paint Phoenix Purple campaign, visit paintphoenixpurple.org.  If you or someone you know is in need of victim services, call the city’s Family Advocacy Center at 602-534-2120 or the National Domestic Violence Hotline at 1-800-799-7233.

The success of this plan is based strongly on community support.  The city partners with the Arizona Coalition to End Sexual and Domestic Violence, the Sandra Day O’Connor Institute and community leaders to implement the Roadmap to Excellence.

Make a Difference day is a special event where community volunteers come together to help make improvements to the Tres Rios area.  There is not a festival associated with this event, it is only a clean up so there are no exhibitor spaces.  There are a lot of opportunities to pitch in and help though!  Donate food, drinks or supplies for the clean up, or pull your organizations members together and volunteer to help!

For those with a weaker heart, the park offers Cactus Cooler, an 1100 foot long lazy river, and Monsoon Bay, a large wave pool. And for younger kids, there’s Boogie Board Beach, an interactive water play structure with a tipping bucket and smaller kiddie slides, and Soak ’em Playground, a play pool with pint-sized slides.

The Splash Pad, located at the Goodyear Community Park, 3151 N. Litchfield Rd., is open seasonally from the 3rd Monday in April through 3rd Monday in October. Daily hours are from 9:00 AM to 8:00 PM. Splash Pad users please read below. Please note: the Splash Pad may be closed for multiple days due to repairs from improper use, vandalism, or unsanitary conditions. Read about CDC’s recommendations on health swimming [PDF] and know “Your LAAPS” [PDF] before use.

All parks in the city of Goodyear are now smoke-free environments, providing park visitors with healthier, more pleasant environments for recreation and relaxation, as well as reducing litter and cleanup costs. Designated areas for smokers will be offered in parking lot areas.

Free viewers are required for some of the attached documents.
They can be downloaded by clicking on the icons below.